TODAY IN BERLIN: THE FIRST TO GO – DOROTHY THOMPSON’S EXPULSION FROM BERLIN AND NAZI GERMANY

She described him as “formless, almost faceless, a man whose countenance is a caricature, a man whose framework seems cartilaginous, without bones. He is inconsequent and voluble, ill poised and insecure. He is the very prototype of the little man.” And later added, with more than just a touch of derision: “I bet he crooks his little finger when he drinks his tea.”

For Adolf Hitler, who had his real or perceived enemies – including former friends – tortured, slayed or sent to concentration camps, and who never forgot or forgave a slight, these words written by an US foreign correspondent in Berlin, Dorothy Thompson, could have sealed her fate. Luckily for her, being an American and a celebrity, for the time being she was out of Nazi henchmen’s reach.

But revenge had to be taken. Adolf Hitler despised this outspoken, self-assured woman who dared make a fool out of him and did so in front of the whole world. Revenge, however, need not to be taken in haste. The Führer had time. 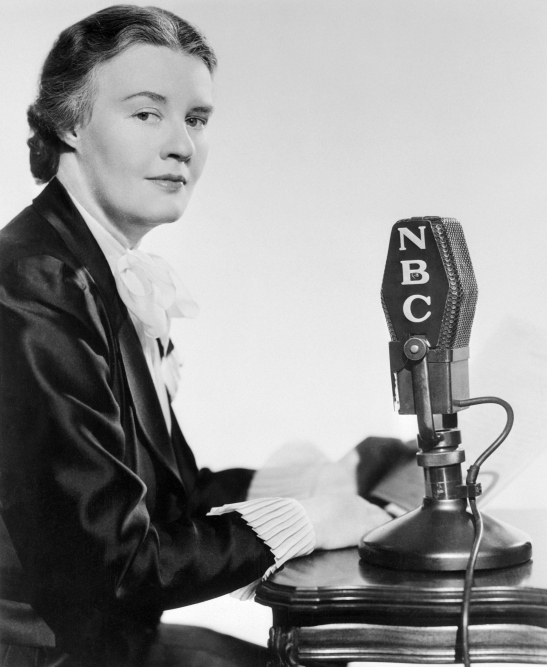 (Original Caption) Dorothy Thompson, columnist, wife of the American novelist Sinclair Lewis. She is shown sitting with and NBC microphone on her desk.

In 1931 Dorothy Thompson was invited by the National-Socialist Workers Party, better known as NSDAP, to interview their leader. She had already followed his career before that – in fact, she took interest in him and his followers even before she arrived in Germany in 1925 as Central European correspondent for the New York Evening Standard. As a Vienna correspondent for the Philadelphia Public Leger and soon the first female head of a foreign press bureau, she watched the events in Bavaria and in Germany as such with growing unease. During nearly a year spent in the Germany of the Weimar Republic (1922-23) she learnt that the fascist movement was something she and the rest of the world better kept an eye on.

It was at that time that she made her first attempt at interviewing Hitler. For someone who had enough chutzpah to use a disguise to meet a deposed Hungarian monarch (Karl I, a notoriously reclusive man whose castle she entered by pretending to be a nurse), talking to a Nazi leader immediately after the failed 1923 Beer Hall Putsch seemed far less dauting a task. Yet the plea for an interview was rejected. It is quite possible, of course, that after the failed attempt at overthrowing the republic the Nazi party had plenty of other questions to answer. On the other hand, it was nobody’s secret that Hitler hated being interviewed and strongly disliked talking to strangers who according to another US journalist, Hans V. Kaltenborn, “intimidate him”: “He compensates for his timidity by raucous self-assertion in their presence. Instead of answering an interviewer’s questions, he makes excited speeches, thus seeking to create for himself th atmosphere of a public meeting in which he is at home.”

When in 1931 Cosmopolitan magazine asked Thompson to talk to Hitler and provide them with a well-honed piece about the more or less elusive new leader, she grabbed her chance. The rising dark star of German politics refused to speak to anyone who disagreed with him, fully aware of his – to quote Kaltenborn again – “inability to persuade individuals”. They met at Hitler’s Berlin’s regular lodgings – at the Kaiserhof Hotel (he never owned his own flat in the capital, staying either at those of his loyal high-rank followers or at the said hotel). 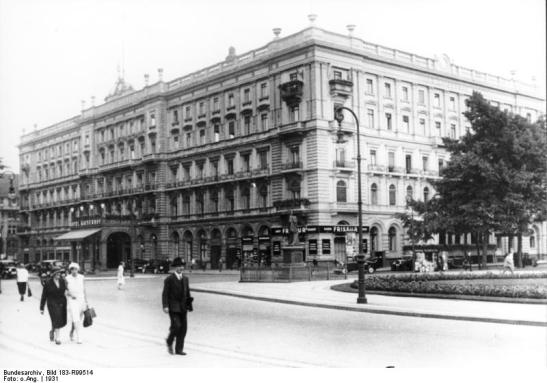 The Kaiserhof Hotel on Ziethenplatz, off Wilhelmplatz, in 1931. (image via Bundesarchiv).

The outcome of that meeting was published in March 1932 and made the Nazis absolutely livid. Worse was yet to come: Thompson wrote a book about Hitler. “I Saw Hitler!” was released in 1932 and immediately made waves. People wanted to know who this new, apparently revered by his own people, and yet so scathingly criticised by an American journalist who actually met him, man was.

Although guilty of initial misjudgement – Thompson considered Hitler to be incapable of becoming a leader – the journalist quickly adjusted her view of him. What she observed in Germany not so much worried her as made her absolutely certain that the world was facing something so ruthless, so determined and so manipulative that a massive conflict was unavoidable.

After the 1933 election, which finally gave the Nazi Party the desired political leverage, she wrote: “There never were such elections in a modern western state. The entire opposition press was muzzled, and for much of the time supressed. The chancellor’s private army, the S.A. troops, and their picked division, the black-breeched S.S. men, broke up opposition meetings, terrorized the streets, staged rows, beat up Social Democratic deputies, and even assaulted leading Catholics.”

The article “Back to Blood and Iron”, published by the Saturday Evening Post in May 1933, was and still is one of the most brilliant pieces of journalist writing of the time, offering a very lucid, extremely convincing picture of the things to come. Consider her comment on the root of the problem: “Psychologists say that it is a characteristic of an infantile or sick mind that it cannot deal with reality. Whatever else the Hitler revolution may or may not be, it is an enormous mass flight from reality. Hitler, whose only genius thus far displayed has been his power of mass suggestion, of making people believe – against reason, against facts – has told the German people what they would like to believe. He has not only promised them a better future; he has done something far more daring – he has calmly and by virtue of mere statement reversed the past. He has hypnotized his followers with a vast myth.” These frighteningly true words, the briefest possible sharp analysis of the phenomenon, still ring a bell in 2020…

Having said all that Dorothy Thompson must have realised that her days in Nazi Berlin and in the Third Reich would be coming to an end, one way or another. What she did not expect was to become the first foreign correspondent to be expelled from Hitler’s kingdom. It happened on the morning of August 25 1934 at the Adlon Hotel on Pariser Platz.

During breakfast Thompson was approached by Gestapo, brutal Nazi secret police, who delivered a letter kindly requesting that she leave Germany within the next 24 hours. It named her “numerous anti-German publications” as well as “national self-respect making it impossible for German authorities to offer her ‘further right to hospitality’” as the reasons for their decision. It also informed her that should she fail to leave out of her “own free will”, she would be officially expelled.

Dorothy Thompson was tempted to put that threat to a test but eventually decided to go. The US ambassador to Berlin, William E. Dodd, forced to offer plenty of diplomatic wizardry to keep the situation from snowballing into an open conflict between two world powers, convinced her not to challenge the Gestapo and go before it was too late.

She must have been aware, however, of how great was the risk. After all, her own letters contained descriptions of the until then unimaginable violence of the Nazi thugs: “They have a pretty habit of breaking into the houses of people whom they do not like – and they don’t like anyone who’s a pacifist, an internationalist, a Jew, a socialist, a Catholic, or a radical… dragging their victims out to the so-called “Braune Etagen” which are big flats, usually used as dwelling quarters by numerous S.A.’s, and there simply torturing the victims.(…) They beat them with steel rods, knock their teeth out with revolver butts, break their arms – a favourite trick – give them a litre of castor oil; bring them out of unconsciousness by throwing water in their faces, or mustard in their eyes, urinate on them, make them kneel and kiss the Hakenkreuz…”

Each line of that letter was a standing proof that the world was dealing with barbaric wickedness not witnessed in Europe for several hundred years.

Dorothy Thompson arriving in Paris with the roses given to her by Berlin colleagues and friends. (image via AP)

So the next morning, on August 26th, despite her wish to stay and report from the front line of the gathering storm, Dorothy Thompson boarded a train to Paris. A small crowd had gathered on the platform of what was most probably Schlesischer Bahnhof (today Berlin’s Ostbahnhof) to bid her farewell: colleagues and friends presented her with the bouquet which she would be holding in her hands when disembarking in Paris later. A bunch of “American Beauty” roses.

Back in the USA Thompson, then also known as “Mrs Sinclair Lewis” (at the time she was married to the Nobel Prize winning American author), would say: “As far as I can see, I really was put out of Germany for the crime of blasphemy. My offence was to think that Hitler is just an ordinary man, after all. That is a crime against the reigning cult in Germany, which says Mr Hitler is a Messiah sent by God to save German people – an old Jewish idea. To question this mystic mission is so heinous that, if you are a German, you can be sent to jail. I, fortunately, am an American, so I was merely sent to Paris. Worse things can happen to me.”

She was right again. Worse things did happen but by that time the “American Cassandra” was safely out of the Nazi reach. And continued to write in a way which drove Hitler and Goebbels mad with anger. In August 1941 “Harper’s Magazine” published her text “Who Goes Nazi?”, an eerily prophetic (although in fact simply based on a brilliant gift of observation) game of trying to assess possible Nazi sympathies in people gathered at a party. Just like her “Back to Blood and Iron” this article offers a striking analysis with plenty of reference to here and now. 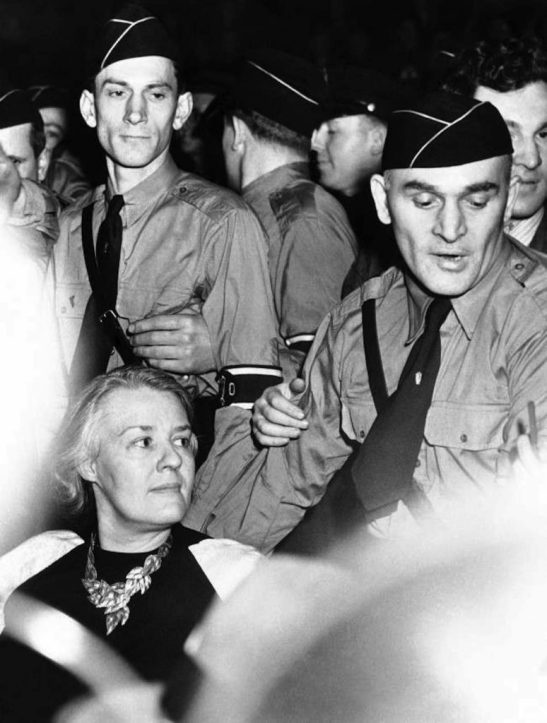 Thompson harassed by the US Nazis during the Nazi rally in Madison Square Garden, New York, in February 1939. She continuously jeered at made loud comments during the meeting – as one of few clearly anti-Nazi observers.

Dorothy Thompson continued to be a staunch opponent of the Nazi movement and advocate of powerful resistance towards Hitler’s politics. She was disturbing, brilliant and impressive in every way but especially in the way she commanded the room she entered or a page she wrote on. Her personal life, too, was full of sudden twists and back then unorthodox relationships: even though married to Lewis, Thompson had a meaningful, long-term affair with Christa Winsloe, author of “The Child Manuela” a book which was canvas for the German film-classic, Mädchen in Uniform with young Romy Schneider.  She left a bulk of writing which continues to impress with its lucidity, straightforwardness and excellent writing style.

Dorothy Thompson died in January 1961 in Portugal but she will for ever remain in the pantheon of the great 20th-century journalists.

7 comments on “TODAY IN BERLIN: THE FIRST TO GO – DOROTHY THOMPSON’S EXPULSION FROM BERLIN AND NAZI GERMANY”