FLIGHT FROM HELL: BERLIN IN APRIL 1945

In March 1945 the Third Reich authorities issued an order that turned a section of the Nazi-built Ost-West-Achse – an impressive Tiergarten boulevard known as Charlottenburger Chaussee before and as Straße des 17. Juni today – into a mid-city airstrip. The street was immediately stripped of famous Speer-Laternen (street lights designed by Albert Speer for his master, Adolf Hitler, and unveiled one day before the latter’s 50th birthday) and trees flanking it on both sides got felled to allow Luftwaffe machines (among others, Tante Ju’s or Junkers Ju-52) to fly in the Nazi marine troops right into the heart of the city. And right into the eye of the storm which history knows today as the Battle of Berlin.

Impressive as those landings sound, they could hardly compete against what must have been the ultimate dare-devil flight of Germany’s Untergang – the Berlin flight of Hanna Reitsch and Robert von Greim.

On April 26 1945 when Berlin was nothing more than a fiery battlefield swathed in angry, billowing clouds of dark smoke; when the city was trembling under endless explosions that gutted it and killed thousands of those who sought sanctuary in its underground; when its so-called Führer locked himself in inside his last Great Reich fortress, while the Red Army was already inside the Tiergarten – on such an infernal day one woman flew over Berlin and landed her small aircraft safely among fire and brimstone. She flew for the wrong cause but what Hanna Reitsch did was beyond daring. 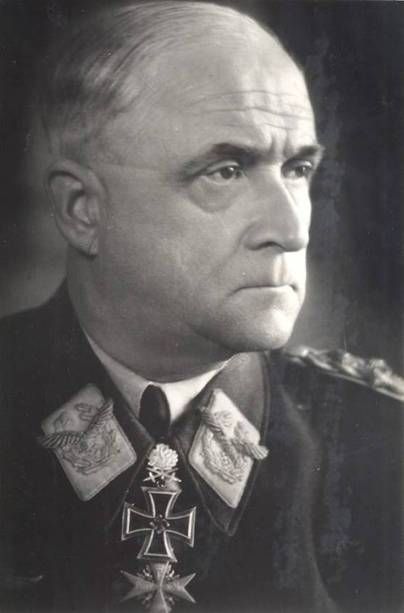 Robert Ritter von Greim with his Iron Crosses (his Knight’s Cross with Oak Leaves and Swords is on sale – like so many other German WW2 artefacts, at a US auction house).

Having convinced Robert Ritter von Greim, Luftwaffe’s new Commander-in-Chief to be sworn in as Göring’s successor, to allow her to accompany him on his way from Munich to Berlin, Reitsch and the future General Field Marshall undertook a nearly impossible task. However, after Göring had turned his back on the 3rd Reich and his Führer and headed for the south, following three large freight trains packed with works of arts he hoped to “save and protect”, the Nazi leaders gathered in the Führerbunker felt it had been imperative to provide an official successor.

With only one Berlin airfield, Gatow, still under German control but being battered by constant and relentless fire from the Soviet side, they were supposed to start the plane and steer it right into the combat hell that the Tiergarten had become: Hanna Reitsch and von Greim were to land near Brandenburger Tor. From there a car would take them to their master’s bunker in Wilhelmstraße.

They reached Gatow as passengers on board of a Focke-Wulf Fw-190 fighter from an airfield in Rechlin some 60 miles away from the capital, where they had landed on the first leg of their journey. The chilling account of the flight to Gatow includes Reitsch being pushed feet first through a small hatchet and locked in a horizontal position inside the rear fuselage – the plane’s cabin was too small for three. After touching down and seeing the extent of destruction there, the two waited until the evening and boarded a small, two-seater reconnaissance aircraft Fieseler-Storch Fi-156 – more of a toy, really, than a piece of warfare that one would expect to be called for under the circumstances. 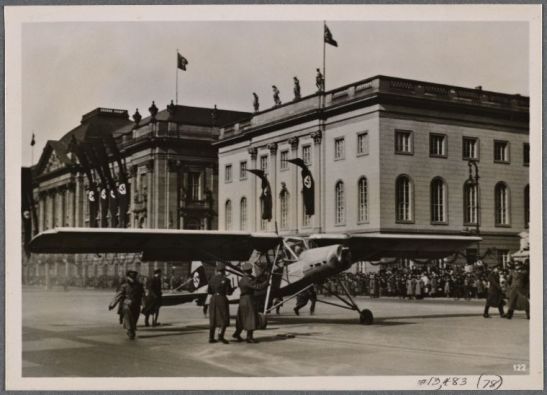 Fieseler-Storch landing in Unter den Linden in front of the Humboldt University building in 1939. (image by H. Hoffmann via New York Public Library).

But the tiny Fieseler-Storch had several crucial advantages: it was small, it was fast and, as a STOL aircraft (for “short take-off and landing”) it needed as little as 20 metres to start and to land. In 1943 the very same machine was used to air-lift Benito Mussolini from his arrest at a hotel on Campo Imperatore in the Gran Sasso mountains in Italy (Unternehmen Eiche was one of the most spectacular military operations of this sort ever).

Now it was up to von Greim and Reitsch to make the best out of it. She was a brilliant aviatrix, a multiple world record holder in gliding and an absolutely fearless test pilot for almost every single German Second-World-War aircraft. Reitsch was also the first and the only woman ever to have been awarded the Iron Cross 1st Class. Which meant that the tiny Fieseler Storch was to have two Iron Cross 1st Class recipients on board (von Greim was awarded his in 1915).

Reitsch got hers after her test flight of the rocket-propelled Messerschmitt Me 163 “Komet” – she already had the Iron Cross 2nd Class given to her by Hitler for test flying the Stukas (Junkers Ju 87, German dive bombers) and the Dornier Do 17 adjusted to cut the English barrage balloon cables over London.

If anyone could land that machine in Berlin now, it was those two.

When they got on board, it was von Greim who took the pilot’s seat: unlike Reitsch, he had experience in flying under fire and they were about to fly into an inferno now. Reitsch sat behind the more experienced general – who was also her lover (Reitsch and von Greim met in 1943 when she flew with him between the Eastern Front posts boosting the morale sinking during the Battle of Stalingrad). The machine took off.

When they reached Berlin, it was hardly possible to see anything, so powerful und relentless was the Red Army’s fire and the German side’s response to the assault.

With the aircraft flying low, just at the tree level, it was hit repeatedly. One of the missiles smashed part of the airplane’s floor and almost shattered von Greim’s right foot into pieces. He lost consciousness and slumped to the side.  It was then that Hanna Reitsch took over: being quite petite and slender, she managed to squeeze herself between von Greim’s seat and the side wall of the plane and take over the steering. Having established their position over the city, she headed for what she believed to be Charlottenburger Chaussee. And then, with guns and cannons in the Tiergarten pummelling at them from the ground and the emergency airstrip glowing with burning debris, she sat the Fieseler-Storch down safely on today’s Straße des 17. Juni. 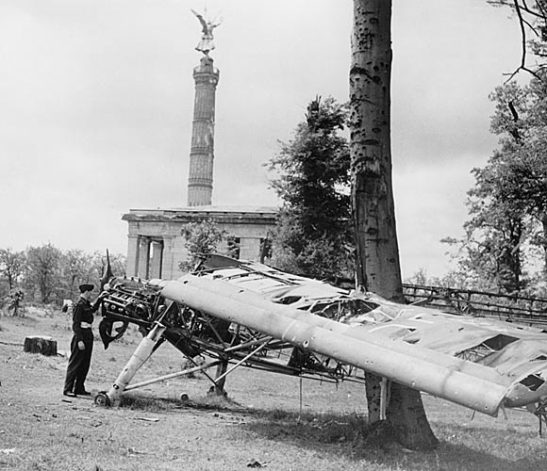 A US soldier inspecting the remains of Hanna Reitsch’s and von Greim’s “Storch” in Berlin’s Tiergarten, May 1945. (photo by NN via akg-images)

Reitsch pulled Ritter von Greim from the plane and managed to dress his wounds as well as she could. After minutes of growing panic, the promised military vehicle arrived. It took them to Hitler’s bunker where several hours later von Greim got the highest command of the German Luftwaffe along with the title of General Field Marshall. On April 30th at dawn, having accepted Hitler’s decision to remain in the bunker and taken his personal gift for them (ironically “gift” is also the German word for “poison”) – two small glass vials filled with blue potassium cyanide – Hanna Reitsch and Robert von Greim boarded an Arado Ar 96 waiting for them near Brandenburger Tor and flew out of the dying city. Convinced that it was Hitler who was on board of the plane, the Soviet 3rd Shock Army units kept pummelling at it to bring the aircraft down but the fire was in vain.

Several days later Hanna Reitsch was captured by the US troops and spent the following 18 months interrogated. She refused the offer of joining other German aviation and aircraft experts in the United States and insisted on staying in Europe. Despite all this, in 1972 she was awarded the  American title of the Pilot of the Year.

Although she continued her career as an expert glider pilot and kept breaking new records as well introducing new standards, in 1958 Poland banned her from participating in the World Glider Championships organised in that country that year. She might have been a brilliant aviatrix, an absolutely fearless pilot but, first and foremost, Reitsch was an ardent Nazi (despite what many wanted to believe, you could be one even without a party card) – she worshipped her Führer and did her best to support, promote and prolong the regime’s reign. She was also a coward in her denial of her crime: she never recognised or come to that admitted her guilt and displayed no signs of it. Just like one of her great competitors for Hitler’s attention, Leni Riefenstahl.

Robert von Greim committed suicide using one of the potassium cyanide vials given to them by Hitler. He killed himself in May 1945. Hanna Reitsch died in Frankfurt am Main on August 24, 1979, allegedly of an acute heart failure. However, after some initial doubts concerning the other vial and the fact that her body was never given any post mortem examination, rumours she killed herself using the poison passed onto her by her beloved leader never really died down.

Reitsch was an ambiguous character and should forever be seen as such. With the Second World War slowly vanishing in our back mirror today, her story should be told over and over again. To honour her achievements, of which there were many, but mainly to remind ourselves and those to come after us that, like many others, despite her protests and the obvious denial, she was guilty. And as many other utterly vile people who were part of the Nazi regime and went unpunished, she managed to wing it, too.

For those interested in Hanna Reitsch’s story, told both by her and by others, I highly recommend Claire Mully’s book “The Women Who Flew For Hitler” about Reitsch and Melitta von Stauffenberg (Jewish pilot who served the regime to protect her family from deportation to a death camp), as well as Reitsch’s own account of her life published in English as “The Sky My Kingdom”.