TAKE ME TO THE RIVER

Here is a small section of a wonderful 1910 Straube’s Berlin map. As you can see today’s #Badeschiff – a popular river lido with an old sea-container submerged in the Spree in Alt-Treptow and serving as a swimming pool – is not the first “Flussbadeanstalt” (river baths) in this part of the city.

In 1910 keen swimmers could choose between the Municipal River Baths at the end of Cuvrystraße – a place famous for its elegant architecture and swimming lessons which involved being attached to the lower end of what was known as the “Schwimmangel” (effectively just what the name promised: a fishing rod for holding swimmers).

The Badeanstalt slightly further up the river, located at the tip of the Lohmühleninsel and opened in 1847, went under the name of Sachsesches Badeanstalt or the Wellenbadeanstalt. Its special appeal lay in its irresistible offer: waves (produced by machines powered by a steam-engine) and diving with underwater illumination (by holding special lamps in one’s hands). 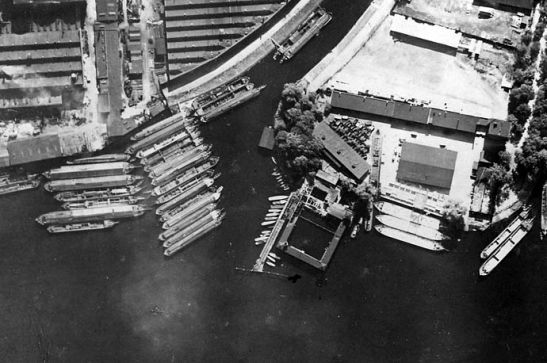 It is impossible to tell how many tens – hundreds even – of thousands of people owed some of the best moments in their otherwise drudgery-filled lives to those two places (equally high numbers owed their swimming skills to the Pfuelsche Badeanstalt built by a Prussian General von Pfuel in the middle of the Spree slightly further west, in Köpenicker Straße). Suffice to say that when both were demolished in the early 1920s – after having been repeatedly (and not always accidentally) rammed by river boats and barges, Berliners mourned them for decades. Perhaps one day, thanks to initiatives such as Flussbad-Berlin we will be able to enjoy a dip in the Spree again?