GOOD FILM – BAD FILM or ONLY TIME CAN TELL

Today, a quote from a film review published by “Berliner Börsen-Courier” (the evening edition) on March 11, 1927:

“Thea von Harbou invented an impossible plot over-stuffed with themes and stories […] Nothing but emotional rhetoric. Dreadful. The only proper topic treated in an unbearably kitschy manner. Special effects used not because world views threaten to explode but because the film wants to have its tricks. The end, a tearful reconciliation of the workers and their masters – abysmal.”

The critique was only one among many negative responses to Fritz Lang´s new film, which had its premiere on March 10, 1927 – exactly 90 years ago today – at the UFA-Kino at Nollendorfplatz in Berlin-Schöneberg. The plot was considered to be bad, the film itself overloaded with special effects as well as with bombastic but meaningless scenes and there were even those who did not appreciate the camera-work.

Today, “Metropolis”, filmed at the then new Großatelier of the Babelsberg Studio in Potsdam (later the set for Der Blaue Engel or Inglorious Bastards) with its script written by Thea von Harbou and filmed by von Harbou´s then husband, Fritz Lang, is part of UNESCO´s Cultural World Heritage and a classic of the world cinematography. 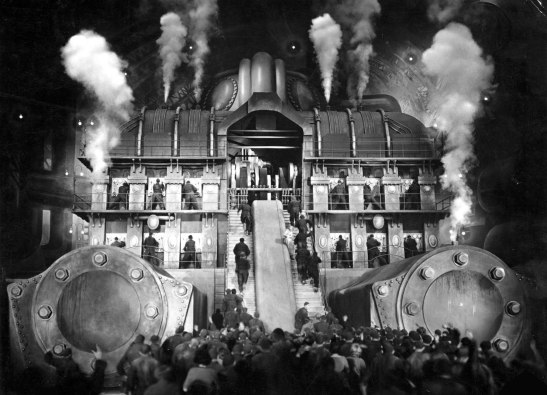 This entry was posted on Mar 10, 2017 by berlincompanion in architecture, FILM, history, history of Berlin, Kreuzberg.