EVERYTHING IS SOMEWHERE: OLD CELLARS UNDER THE DEATH STRIP

While construction works for a new residential building on the corner of Luckauer Strasse and Sebastianstraße in Kreuzberg are picking up the pace, workers have unsealed the old cellars of the 19th-century tenements which stood here before the Second Generation of the Berlin Wall was erected.

As the wonderful photo by Willy Pragher taken on June 9, 1965 shows, the houses were still there when the First Generation Wall was built (Berlin Wall went through several stages of evolution and this image presents the early one).

Demolished somewhere around 1970 (most probably 1968), the buildings were not removed completely: the cellars remained. For years, after the Wall had been removed, many people walking down Luckauer Straße next to today´s Alfred-Döblin-Platz on hot summer days wondered about the strange cool draft sweeping their ankles and the earthy, musty smell of a cellar in the air.

Several narrow gaps on the edge of the pavement, where large stone steps typical of Berlin tenement entrance stairs led nowhere, proved the existence of the the old basements which had not been filled.

Recent construction works uncovered them again and brought to light what had been hidden for 56 years. It seems they had been used, at least parts of them, in the meantime, though: the tiles on the wall of one of them are held by some sort of black foam that is neither 19th century nor pre-Berlin Wall. Perhaps the guards spent their time there? Or the place served some other Wall-related purpose? We will never know.

In a week, maximum a fortnight, the old cellars will be gone. It´s a strangely satisfying feeling to be able to look into them after having known for years they were there, unreachable under the ground.

They are another trace of the past which must go. 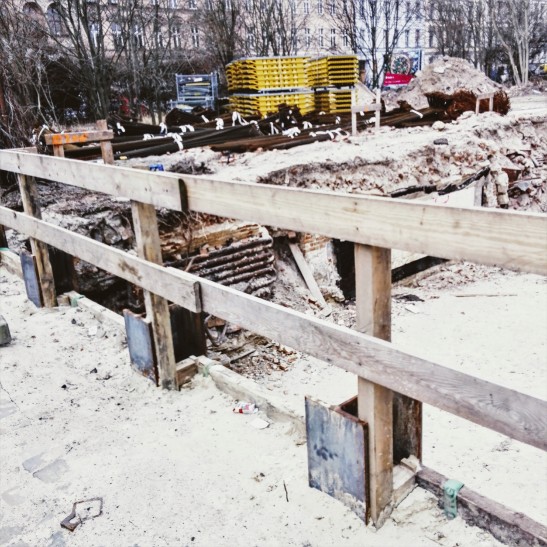