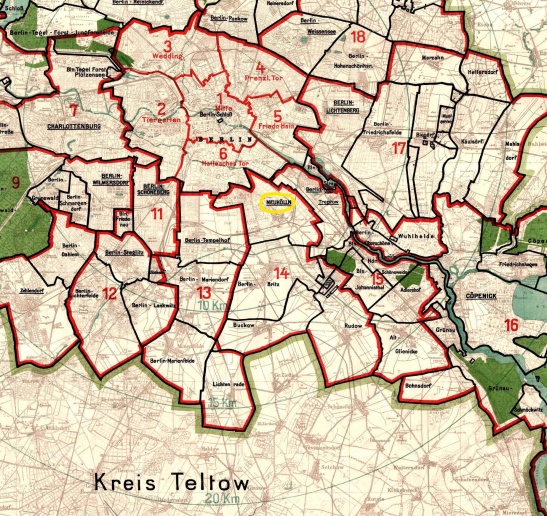 On 27 January 1912, Rixdorf – a very popular Berlin borough today but then still a self-governing town – underwent a little PR adjustment to improve its ratings among business-people and potential investors. On Kaiser Wilhelm II’s fifty-third birthday, and with the Kaiser’s consent, the allegedly notorious and morally corrupt area of Rixdorf was given a new name to polish its tainted image.

Its negative repute was not entirely unjust. With around 150 bars, cabarets, seedy little penny theatres and Kaschemmen (dives), it catered mostly to the ‘unrefined’ tastes of the lower classes, who happened to make up the majority of its residents. Described by the proponents of the renaming as ‘proletarians, criminals and social-democrats,’ the often impoverished and extremely hard-working residents of Rixdorf were very much in need of inexpensive entertainment, which they found – along with throngs of non-Rixdorfers flocking in from Berlin – in the establishments in the Hasenheide, a large local park on the border between Rixdorf and today’s Kreuzberg.

A postcard showing the merry crowds in the Hasenheide, today a large park between Neukölln and Kreuzberg.

Turning Rixdorf, which before receiving its city-privilege in 1899 was the biggest village in Prussia, into ‘Neukölln’ was intended as a watershed for the end of the proletarian rule. But the change was not voluntary: while the ‘great unwashed’ refused even to consider the option, property owners and conservative local politicians pushed for it with growing determination. Rixdorf, which until 1920 was an independent town – and, with nearly 250,000 residents, one of the most densely populated municipalities in Germany – discovered that its proximity to the fast-growing city of Berlin significantly increased its value. It also realised that a new underground line connecting it to the capital would make that value grow even more. In order to profit from these developments, however, a crucial problem needed to be addressed: no potential buyers or investors would move their assets to Rixdorf if the place remained a cradle of ribaldry and ‘suspicious’ political movements. 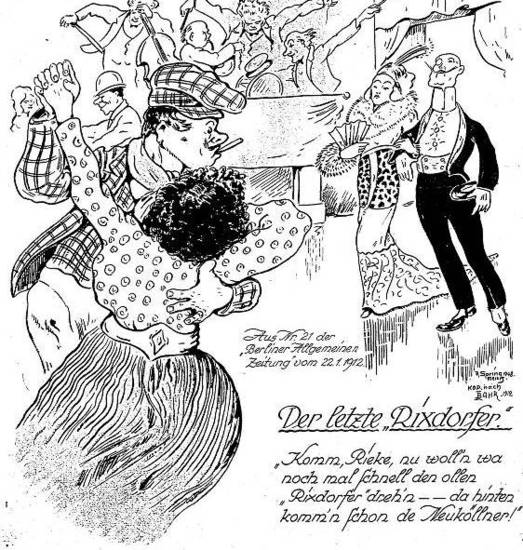 A cartoon mocking the name-change (collection of the excellent Museum Neukölln).

The influential Berlin Bourgeoisie appealed to the Emperor for his help, and the sympathetic ruler promised to do what he could. And he did: in 1912, the 552-year-old Rixdorf vanished from the map and was replaced by Neu Cölln, named after the old sister-city of Berlin. Today, Neukölln is among the most popular Berlin boroughs and even though the name might be different, the place is just as much fun to visit as it was before 1912.

One comment on “HAPPY BIRTHDAY, NEUKÖLLN! How Rixdorf got upgraded”