LIGHT UP THE LIGHTS: IT´S CHRISTMAS IN BERLIN AND BEYOND

It´s Christmas Eve of 2016, one of the most difficult, confusing and hateful years Europe has lived through since the end of the Second World War. Certainly the most frightening, challenging and confusing year in my own chronicle – Polish Martial Law of December 1980 left me only slightly agitated: I was eight years old and what got me most was the fact that a balding man with thick dark glasses, held upright by his heavily decorated uniform, stole the broadcasting slot of my favourite Sunday morning TV show. I had no real idea what went through my parents´ heads: my father´s, who vanished for two weeks along his police troops when tanks gathered outside in the streets; my mother´s, left alone with an infuriated 8-year-old (no Sunday morning show!), a new-born baby and no way to call anyone for help since we had no phone and those, whether public or private, were dead anyway.

Today, I look at my family, at my three sons – my little born-and-bred Berliners, my own small ”Polish-German reconciliation programme” – and like my parents back then, like my grandparents almost 80 years ago and my great-grandparents when the First World War swept through their world, I do only what most of us can to today: do my best and hope for the same.

It is time for traditional Christmas wishes to all of You, Dear Readers, but which Berlin image do you choose to illustrate that festive post? One of Franz Skarbina´s wonderful Christmas market paintings he so lovingly – and generously! – provided? Bathed in subtle green and white and gentle gold of the burning lights? Or something more dramatic from the days of the Berlin Wall, when Christmas trees stood next to the Death Strip and small school-children sang their carols at the Brandenburg Gate for those waiting or, depending on what one wanted to see, lurking on the Wall´s other side? Or one of the family photos taken by a Schöneberg couple at Christmas for 42 years every year since 1900?

I mused over my collection for a while when I suddenly remembered this image: a photo taken on Christmas Eve of 1918 in Berlin´s Lustgarten, a place where History was made and often got un-ravelled. Where people gathered to celebrate together but also to express their anger or their despair. On December 24, 1918 they stood there appearing to feel none of the above. Their world, which had fallen out of its tracks like a speeding train driven by a madman, sweeping and extinguishing millions of lives as it went, came to a halt again, still shaken by tremors which, in fact, were a new, unyielding wave of trouble (the Kaiser was gone and the New Order fought with its many own heads). Those people standing between the Old Museum, the Cathedral and the City Palace look tired and uncertain and the crowd is smaller than it used to be in those many years before. But they are there. They came despite the danger – the city could erupt any moment in a new series of shootings and chases, as it in fact did very soon afterwards – and stood there under what looks like the darkest night sky. The lights on the Christmas tree could hardly illuminate the space around it, not to mention light up that night. 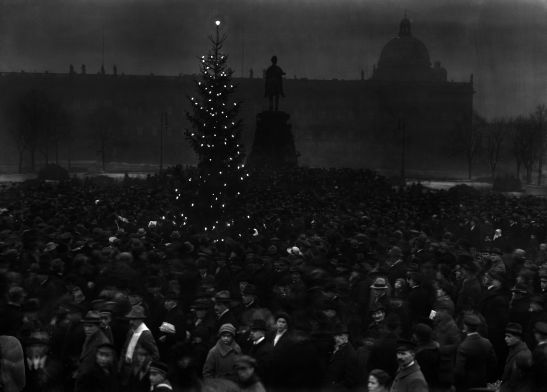 But there is something about that image so striking and so heart-warming that I could not possibly find a better Berlin photo for today: they came. And they stood there. Despite so many worries, so much evil that happened and was – perhaps – still to come. They did what they always did: they did their best and hoped for the same.

Let´s not show any half-empty gestures, light up digital candles and endlessly ride the wave of tragic events that sweep our world. Let us do what really makes sense: our best. And always, always hope for the same.

3 comments on “LIGHT UP THE LIGHTS: IT´S CHRISTMAS IN BERLIN AND BEYOND”

This entry was posted on Dec 24, 2016 by berlincompanion in Berlin and tagged 1918, Berlin, Berliner Dom, Berliner Stadtschloss, cHRISTMAS, Lustgarten, Römer.