BERLIN 1933: THE HUMILIATION OF CARL HERZ

1933 was an ugly year. Open almost any edition of Vossische Zeitung from that time – Tante Voss was among the most popular German newspapers and the most widely read Berlin daily – and you will read of events whose meaning can only be fully grasped from the safe perspective of today. In only three days, between the 10th and the 13th of March, around the infamous elections which gave Hitler his final prize, a strikingly high number of people were reported dead, attacked or injured in not entirely clear circumstances.

Clearly, something very wrong was happening in Berlin and around it.

The more surprising it is that in those three days and with two editions per day (morning and afternoon one) only one line was devoted to two occurrences which should be considered as marking the end of the rule of law in Kreuzberg. Or was it the beginning of the new rule and the new law? Whatever the perspective, on the 10th and the 11th of March 1933 the old rules were irrevocably broken. 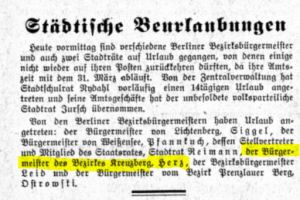 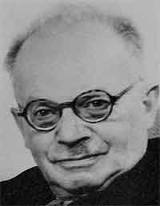 On March 10th, shortly before 12:00 AM Carl Herz, the Mayor of Kreuzberg, is attacked and arrested in his own office in the old Rathaus Kreuzberg – Kreuzberg Town hALL – in Yorckstrasse (the building is still there, well hidden behind the 1950s town hall building). A group of eight, maybe ten SA members, Hitler´s little “soldiers” from the Nazi para-military wing also known as Brownshirts, entered the Mayor´s room and informed Herz he had been stripped of his title and office and was to leave the building immediately.

Despite his protests, they forced him to go outside, using kicking and pushing as final arguments, and made him as well as several other Jewish members of the borough council face an angry crowd that had already gathered – most certainly not accidentally – in front of the house. The group were accused of corruption and embezzlement: allegedly, they had stolen the money meant to be paid as unemployed benefits. As if that were not enough, they were also blamed for intentionally mistreating people and accused of having participated in theSklarek Affair (a big corruption case of the 1920s/1930s that involved issuing fake bills for textile deliveries contracted by the  municipal government; the Sklarek brothers were Jews as well as members of a left-wing party).

Carl Herz was forced to greet the crowd with an arm outstretched in a Nazi salute, banned from re-entering the council building and taken in “Schutzhaft” or “protective custody”. The irony of the term did not escape Herz himself, who later wrote about the whole event in a report which is still deposited at Berlin´s Stadtarchiv.

The Mayor of Kreuzberg – officially “on leave” – was to be brought to one of the main SA chambers of torture in Friedrichstrasse 234, to the so called Gutschowkeller. However, before being transported there, Carl Herz had to bear an additional humiliation: a procedure well known from much older times. The accused were forced to march through the streets of Kreuzberg among the shouts and attacks from the angry mob. Herz and his colleagues were led down Yorckstraße, down to Grossbeerenstraße and then back towards Gneisenaustraße. Curiously, throughout this whole time the local police – Schupos (short for Schutz Polizei) – were mysteriously missing from the scene.

The “procession” visited Bergmannstrasse and took Herz to Markeinekehalle, where he was screamed at, pushed and mockingly presented as “Mr Mayor, the one who´s made you pay more for your stands”. Then it reached Mariendorfer Strasse (today Riemannstrasse). There, at the local poor kitchen Herz finally met someone who acted in his defence: an elderly woman stood up to the slandering SA men by telling those gathered that Carl Herz had actually visited the place and taken care of their complaints. Upon which Herz was accused of only caring for the fate of the old…

This scary and at the same time ludicrous performance would have most certainly had a tragic end if it hadn´t been for a Reviervorsteher (a police officer in charge of the local police station). He put Herz under an official arrest, or Schutzhaft: this time, however, to rip him out of the brown claws he had been held by at that moment. The Mayor was taken to the nearest police station and later brought to Berlin City Council where together with the police officer he presented a full report of the events.

In April 1939 Carl Herz and his wife Else fled Germany and go to Great Britain. Two years after the end of WWII they follow two of their children (the youngest son, Günther, died in a concentration camp) to Israel, where Herz died in 1951.

In 1965 the western part of the former Planufer (between Brachvogelstraße and Geibelstraße), a street along Landwehrkanal in Kreuzberg which was partly destroyed during the war and further truncated in the post-war re-design of the area, became Carl-Herz-Ufer.

4 comments on “BERLIN 1933: THE HUMILIATION OF CARL HERZ”