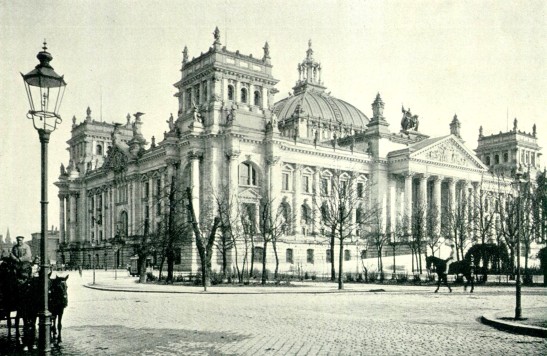 The photo above shows Reichstag building in 1895 (view from north-west).

Originally, the glass used by Paul Wallot to build the cupola roof had dull surface – necessary to allow more light into the parliamentary chamber below (regular glass would have reflected it instead of absorbing).

To make the roof more noticeable and add an air of state grandeur to it, Wallot had the steel frame ribs covered with a thin layer of gold.

The same was done to the Kuppellaterne – the cupola light – on top of the roof. It seemed to glow on top the German parliament like a sun (which was, by the way, one of the ornaments on the steel-frame of the roof).

And what was on the very to of it all – above the parliament, the glass roof and the golden light? The highest point of the original Reichstag was marked by the 1871 imperial crown (Reichskrone).

Parliament or not, it was still the Kaiser who had the upper hand.