YOU ARE HERE: SPRINGTIME IN SAARLANDSTRASSE 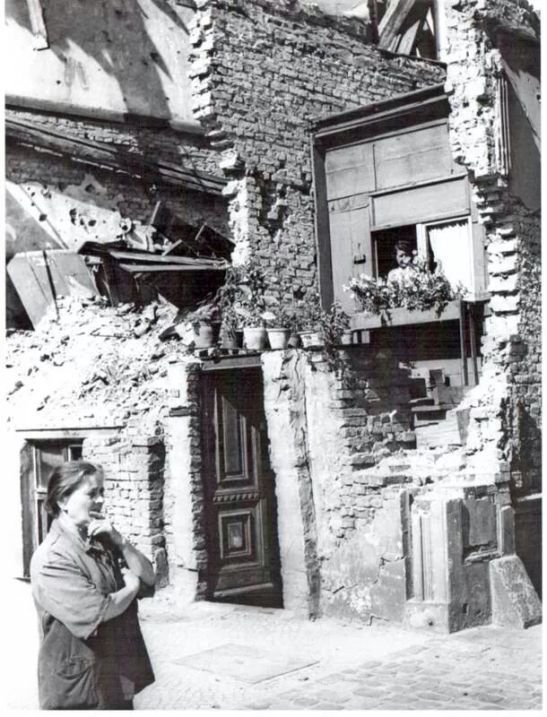 A make-shift in the ruins of Saarlandstrasse (Stresemannstrasse today) in 1945/1946.

Between 1935 and 1947 today´s Stresemannstrasse was known as Saarlandstrasse –  the photo was most probably taken either in 1945 or perhaps a year later, before the Nazi name of the thoroughfare – commemorating the “return” of the Saarland, the area lost by Germany to France after WW1 through the Treaty of Versailles, to the by then 3rd Reich – was changed again.

Today it honours Gustav Stresemann, German Chancellor (albeit only for 102 days) and Secretary of State for Foreign Affairs as well as the recipient of the Nobel Peace Prize in 1926, which he was awarded together with the then French Prime Minister Aristide Briand. Both statesmen were honoured for their mutual effort aimed at reconciliation between their nations, Germany and France.

In 1923 it was Stresemann who in his short period as Chancellor introduced the new currency, Rentenmark, in an attempt at curbing the raging hyperinflation. This move was a signal of the government’s willingness to improve the dire conditions in which most of the society lived at the time and to lift the economy out of the mire it found itself in. That did not prevent him, however, from losing his post soon afterwards.

As a result of his “pro-French” (it was, in fact, very pro-German indeed) politics, his lack of popularity with the rising nationalist and conservative movement was quite understandable. Just as understandable was any lack of sympathy for him to the east of the German-Polish border: Gustav Stresemann was quite prepared to make concessions in the West while working towards another goal – the future German expansion of the Deutscher Lebensraum in the Eastern Europe.

In 1925, when asked whether Germany would help stabilise the Polish market – the world crisis and the political situation within turned it into a roaring volcano – Stresemann famously answered: “[A] final and lasting recapitalization of Poland must be delayed until the country is ripe for a settlement of the border according to our wishes and until our own position is sufficiently strong (…) There will be no settlement until [Poland’s] economic and financial distress has reached an extreme stage and reduced the entire Polish body politic to a state of powerlessness.”

Fourteen years later, on September 1st, 1939, another German Chancellor will decide that that moment has come.