If you could design Kottbusser Tor anew what would your design be like? If you were Dali, you´d most likely chop the viaduct in half, put a giraffe in the middle of the gap and melt all the clocks. If you were Christo and Jeanne-Claude, youwould wrap it up in fabric and spare the ribbon. But as Tita Giese, the German artist and landscape architect, you would use the large traffic island in its middle to put a glass box and plant some reed (which might be a type of perennial grass but still should not be confused with Kotti´s other most popular plant).

Tita Giese´s best known projects include giving a completely new and only partly greener face to Stresemannplatz in Düsseldorf where stapled racks of old car tyres filled with soil became new beds for tall yucca trees, and giving palm trees, bamboo and fungi injections to Hamburg (she famously injected the felled poplar tree stumps with oyster mushrooms to develop their wing-like cultures and make the stumps more pleasing to the eye). Now she is planning to change the face of Kotti, too.

One of the things you have to like about Giese – and after watching and reading several interviews with the self-proclaimed “horticultural composer” one must admit that there might not be many of them – is her consequence. Giese´s designs are immediately recognisable. For the past 30 years she´s been using spaces left over by architecture in urban landscapes and filling them with man-made “Nature”.

Her plans for Kottbusser Tor were created together with Henning Strassburger, a young painter with a studio in Berlin-Kreuzberg. Giese´s idea to introduce reed as the main plant topic has its roots deep in Berlin´s history: the German capital was built on marshy lands, on swamps between the numerous rivers and lakes. And reed, a plant famous for its cosmopolitan nature and growing in all climate zones from tundra to the tropics, is their most common inhabitant. Plus, if you were to go a bit further into this fantasy, you could say that its multicultural presence and its ability to survive in hard conditions make it a perfect candidate for growing around Kotti.

Strassburger´s contribution to the design is the idea to close the reed and the little swamp it will be growing on in a glass display case – for obvious reasons, the glass case will be made of very, very thick glass… Which sounds great and convincing and, let´s be honest, quite cool. Especially if think about all of those car lights that would be reflecting from it by night. But the reflections won´t happen as the artists want to install large LCD panels on the sides of the case for even more ads to be presented to the visually overstimulated nation. The money from renting that ad space would flow into the project and its maintenance but still, it doesn´t sound quite so cool any more.

For those would be no small panels. The glass display case is to have 8-metre long side-walls and be 3.5 metre high. The 35-centimetre deep swamp at its bottom will be fed with fresh water through a special closed system. Its surface is to be covered with silver strips of shredded DVDs (another of Giese´s personal marks is using all sorts of unconventional material to grow her plants on or among). The trees already growing around Kotti would become part of the project as well: the right kind of lighting would make them look clear-cut and pure of form. And they would be surrounded by concrete floor only.

It´s difficult to judge the overall idea as it seems to have some fantastic elements mixed with some pretty unconvincing ones. Still, considering the current visual side of Kotti, any change would be an improvement. The reed sounds like a brilliant touch and so does the swamp and even the weakest (literally – we are at Kottbusser Tor, remember?) link of the glass case sounds good. The LCD panels might fail to impress – what works for Times Square or for Trafalgar Square might fail to light up the faces around Kotti. There´s enough over-stimulation and confusion and traffic around it as it is.

Plus Tita Giese would very much welcome sprayers´s efforts on the outer walls of the display case. Tags look like Asian lettering against the background of reeds, she claims. In which case I´d say: bring more reeds. The tags are already there. 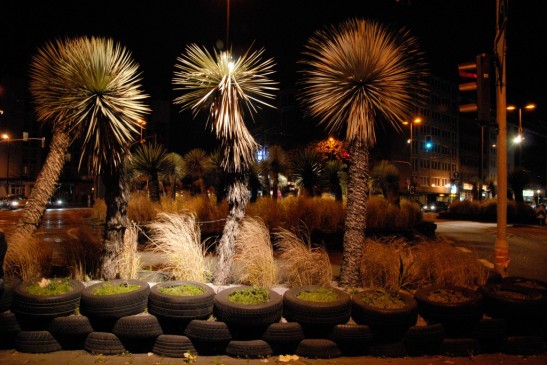