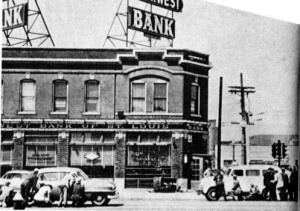 Allegedly, today in the late afternoon another robbery took place in Kreuzberg  – after the last week Friday armed attack inside Kino Babylon in Dresdner Strasse, the robbery in Glogauer Strasse branch of Schlecker not even 24 hours ago and the poor guy in Hasenheide (technically Neukölln, though) who was beaten up and stripped of all that he possessed spare the underwear last night, it might be time to re-consider some things.

The crime-scene was (most probably) Turkish bank at Kottbusser Tor, in front of which only an hour ago a sea of police cars was to be seen. Next to the police cars another car, a van, was parked. The van was, as I am told, missing the back. The bank was missing a window. Plus there was the unmistakable smell of felony in the air.

So far no reports could be found online so it might be that we are the first ones to report on this event. A scoop. Watch the RBB Abendschau tonight for more details.

And now if you will excuse me, I will go and see if the door is locked and the shotgun loaded. It´s Wild, Wild West.

This entry was posted on Mar 13, 2012 by Berlin Companion in A Day in Kreuzberg, Kreuzberg and tagged bank robbery, Berlin, Berlin-Kreuzberg, Kottbusser Tor, Wrangelkiez, X-Berg.