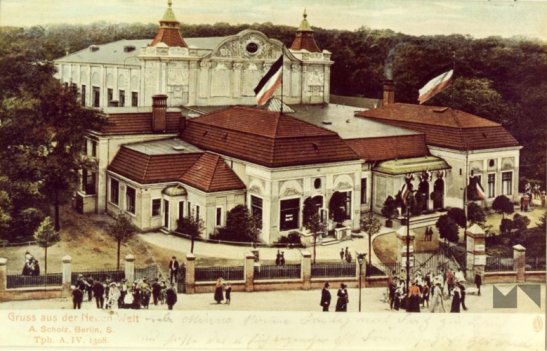 What do Robert Mugabe, Udo Lindenberg and Mao Tse Tung have in common? Apart from questionable fashion taste? And the fact that none of them knew or knows when to stop? As unlikely as it might seem, the answer is Neue Welt. The over 130 years old venue in Hasenheide 107-109 (113 if you count Bauhaus et al.) has seen two of them in person while the third one had crowds of his Teutonic supporters say farewell after he popped the clogs in 1976.

The New World Is Born

Rudolf Sternecker had big plans and for his big plans he needed an equally large piece of land. He found it right next to the eastern end of the road known as Hasenhaide (the alternative spelling “Hasenheide” came in use only in 1907). That is where in 1867 Kaufmann Kelch opened his small brewery with a usual beer garden to pander to the rather unrefined tastes of the thousands of people streaming down the road every Sunday. Instead of the late 19th-century houses that partly still line the road today, Hasenhaide of then was lined with stalls offering all sorts of amusement available to the human kind: ladies with facial hair reaching down to their bosoms, red-headed dwarfs and moustachioed giants, the Strongest Man on Earth, headless girls, orchestra music and fireworks by night. Sternecker knew he found the perfect spot. So in 1880 he opened a new etablissement whose ambition it was to attract a slightly better sort of guests than the ones throwing stones at empty beer bottles a couple of hundred metres further down the street.

To do that he literally built a whole new world: apart from the Indian pavilion standing on a small hill and facing a large pond with a fountain smartly spitting water in its middle, he offered his guests a huge garden with hundreds of tables where they could sip their beer after enjoying one (or more) of the numerous entertainment spots. A carousel, a pony riding arena, a big stage for an orchestra, a ball champetre elevated stage (one for open-air dancing parties), stalls with sweets or curiosities and even an electric train. Built by one Werner von Siemens for Berlin Industrial Exposition in 1879 (its copy can be seen, sat upon and marvelled at at the Technikmuseum in Trebbiner Strasse 9 in Kreuzberg; the original is held hostage in Munich).

The World Is Growing

Such was the success and the popularity of the Neue Welt that already in 1894 even more space had to be provided. Despite being quite pleasing to the eye the Indian Pavilion was by far not big enough for the crowds that were besieging the amusement park. Another room was needed and when finished, the Riesen-Fahnensaal could house as many as 4,000 fun-loving Berliners! Soon afterwards the local newspaper, Rixdorfer Zeitung (back then the area was part of Rixdorf which only in 1912 became Neukölln but was Kreuzberg once – it is all very complicated) described Neue Welt as “the biggest and most attractive amusement etablissement in Berlin”.

Even before the expansion the place was a venue for many important events. Charity concerts were organised to collect money for the poor or for sick children, with military orchestras from the numerous nearby barracks playing sombre repertoire followed by some nice dancing tunes. Miss Margarete Völker was prancing on the tightrope while Miss Leonore put her 450 pounds of weight on amusing display. First company get-togethers were taking place here, like the one organised in the summer of 1895 for the employees of the printing industry. Neue Welt was all about amusement, entertainment and forgetting the world around. But soon enough the world was to find a way of getting its foot in its door.

The success of the Neue Welt seemed to be endless. Eight years after the first re-design it underwent another massive change: the today´s building was erected. Baumeister Sonnenberg´s new creation – a marriage of New Baroque, Art Nouveau with a sprinkling of breezy English seaside architecture – comprised of a main hall for 3,500 guests and a restaurant for another 600 peckish visitors. In 1910 one more extension was added: Herr Sonnenberg built for Arnold Scholz, the owner, a smaller hall for around 1,000 people. Both rooms, surrounded by elevated galleries and fronted by generously sized stages could be joint by simply opening the otherwise separating them doors. Quite soon the size of both places and the convenient plan is going to attract not only those wishing to admire Miss´s Völker of this world. But on the 1st of May 1912, when the grand opening of the new rooms and the re-designed park around them took place the guests were still focusing on the fun part. With a funfair hall of mirrors, a water ride, a big wheel carousel and even a mountain hut that must have looked as if it had been flown in directly from Kiezbühl, Neue Welt was a glittering example of successful customer-targeting. Its Bockbierfest, the opening of the season for drinking strong ale beer popularly known as bock, was one of Berlin events of the year.

The beer was flowing, the crowds were amusing themselves but the atmosphere was slowly getting less and less festive. Outside in the streets the political issues were slowly winning priority. Neue Welt, perhaps willy-nilly, had already before been involved in the political developments of the time: Karl Liebknecht, August Bebel and other key figures of the social-democratic movement were celebrated in Neue Welt´s rooms and the German Communist Party organised here its big meetings. Whatever was happening there, it must have been of some significance if Bismarck himself allegedly shouted: “German politics will not be decided in Hasenheide!”.

With the arrival of a new political power on the scene, the Nazis, the clash was inevitable. Neue Welt became a witness to increasingly aggressive and violent fights between the workers´ movement and the far right-wing and power-hungry NSDAP with its paramilitary arm known as SA (Stürmabteilung). Both camps were organising their meetings in Hasenheide and both were trying to prove the other one weaker. More and more often open street fights were taking place in front of the what was once the solar plexus of fun between Neukölln and Kreuzberg. Until in 1933 the power scales were tipped for good. Afterwards only NSDAP, Hitlerjunged (Hitler Youth was another paramilitary organisation for young men and boys), Bund Deutsche Mädel (the League of German Girls) and their spiritual siblings were allowed to meet up in Neue Welt. The amusement element was frowned upon. Beer and frilly skirts were not good for marching.

Bombs dropped on Berlin did not spare Neue Welt. But already a year after Hitler´s demise the buildings were in use again. Patched up together rather than properly renovated they were again venue for concerts, meetings and speeches. The cinema opened inside the main hall in 1947, Wintergarten, welcomed film fans for another 8 years. The attempt to give Neue Welt its old glory by re-vitalising the old traditions of the place, an experiment started in 1956 by a restaurant owner Karl Kunert, failed despite his best efforts. The old world was gone and the new one went with it. In 1982 its salad days were over for good. Robert Mugabe´s visit in 1976 to win the German hearts for the cause of Rhodesian (today Zimbabwe) ZANU party might have been a success that his eventual rule definitely was not. The wake held for the deceased in the same year Chinese leader also has an entirely different dimension from today´s perspective. 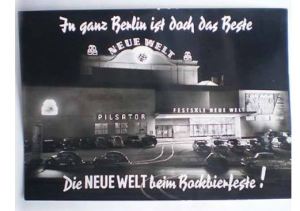 Perhaps the most glorious post-war moment in the history of Neue Welt took place in 1978. It was here that the Alternative Liste, the core of the future Green Party, announced its birth and three years later celebrated the first election success that opened the doors of German Parliament for them.

Even despite having been re-modelled, truncated and filled with cheap looking shops and an even cheaper casino, Neue Welt is putting up a brave face to the world. At its heart resides something that quite gracefully brings forward its tradition of amusing, of fun: “Huxleys Neue Welt” is a club opened in the upper part of the main hall (it was split into two levels to make it for attractive for investors and save from being torn down) while below it the shop tills are ringing and cash is flowing daily. The club has hosted some musical heavyweights and judging by the effect it has on those entering its walls for the first time (speechless awe followed by numerous “wow´s”), it will do so for a many years to come. Also thanks to the roller-skating parties it organises. The Roller Disco seems like a perfect follow-up to Neue Welt´s funfair past. 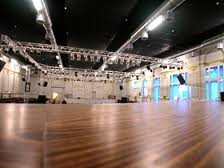